A New Way To Kill Legionella 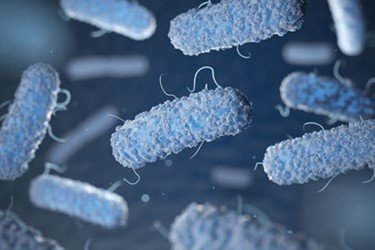 Advanced oxidation provides an all-in-one solution that supports the complete eradication of Legionella in a water system, while also preventing its regrowth.

A new advanced oxidation reagent — chemically, a mineral oxychloride solution — has emerged as a non-toxic alternate to chlorine-based chemicals and non-chlorinated biocides. It may also be the long-awaited chlorinated answer to a worldwide problem that is just getting bigger.

This novel commodity* was certified (NSF/ANSI Standard 60) in 2013 as a drinking water treatment product. It is a complex, yet environmentally friendly formula of oxygen-chelated minerals stabilized in a water-based solvent. It is very effective at oxidizing organic and inorganic matter and destroying biofilm. 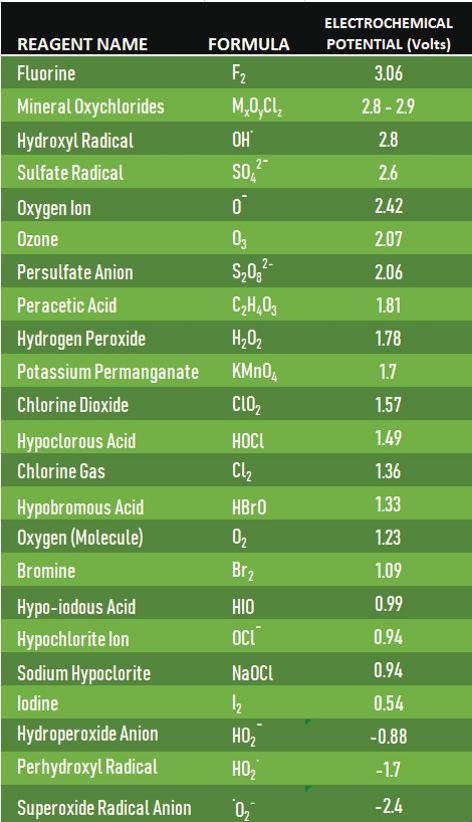 Advanced oxidation processes (AOPs) are among the leading techniques for water purification. The fundamentals were discovered in 1894 with a failed experiment by a scientist named H.J.H. Fenton; that led to the findings of the Fenton reagent, a powerful reaction of hydrogen peroxide catalyzed with iron salts. Still to date, more than 100 years later, Fenton-based processes are the most potent reagents.

The technology of advanced oxidation is highly effective in delivering safe water that is free of organics, inorganics, and microbes. This is possible by the creation of strong reactive oxygen species and their ability to treat persistent, emerging contaminants and micropollutants. Each AOP begins with a source of oxygen, usually ozone, hydrogen peroxide, water or halogenated oxidants, and a catalyst that can come in the form of a chemical substance or in various forms of natural and manmade energy. The oxidant base and the catalyst must be activated onsite due to the high reactivity, instability, and special needs of the catalytic reaction.

This new ecological reagent comes at a pressing time of increasing demand for safe potable water due to exponential population growth, improper management, pollution of natural resources, and drawbacks of traditional treatments. There are thousands of published scientific research studies on advanced oxidation, and the technology has been available for a long time; and yet, it has not been considered a mainstream solution. Why is that the case?

There are several reasons. In addition to the restriction of being a treatment on demand that must be activated onsite, other operative requirements like large capital investment, high cost, significant footprint, ongoing energy consumption, complex implementation, health hazards, and the need for highly trained technicians have confined their use almost exclusively for the treatment of industrial effluents and other challenging situations with dissolved recalcitrant substances, which will not be efficiently removed by conventional methods.

The mineral oxychloride solution is a new generation advanced oxidation. The oxygen source and the catalysts found balance in a steady form as chelated compounds with very weak bonds. There is nothing to mix and no need of supplementing with external activators. It is very stable and can be stored. Its implementation does not require capital investment — a drum and a dosing pump will do the job. It is water-based and easy to scale up and remain cost-effective. It has a negligible footprint, the process does not entail energy consumption, and it is easy to use without the need of specialized training.

Compared to other reagents, the solution ranks the highest at applying active energy to initiate oxidation, otherwise known as electrochemical oxidation potential (EOP). The higher the electrochemical potential, the more forceful the action of attracting electrons and the faster the reaction.

When the chemical comes in contact with water, the mineral oxychlorides form metal-oxy-complexes, which cause an increase in the oxidation properties of the oxygen complex compared to the oxygen molecule alone. They release superoxide, hydroxyl radical, and nascent oxygen ions and produce a valence change in the metal. In turn, the reaction creates hydrogen peroxide, which in the presence of metal ions will decompose into more hydroxyl radicals. This Fenton chemistry is supported by the basic free radical mechanism of Haber-Weiss reactions. It does not need hydrogen peroxide because it is autogenerated as an intermediate reaction. It does not need complicated calculations of catalyst ratio to treat water that continuously changes pollutant concentration; it is not sensitive to pH and is 100 percent soluble, mixes instantly, and oxidizes at a nanoscale speed.

The Fenton science has been long recognized as a water treatment brand that delivers results. It will quickly oxidize organic compounds and microbial life, causing cell lysis. The highly reactive hydroxyl radicals will lead the way in achieving complete mineralization of the organic pollutants into carbon dioxide and water. It can also effectively be used for the destruction of toxic wastes and nonbiodegradable effluents to render them more suitable for secondary biological treatment.

As a drinking water treatment chemical, this new reagent will oxidize organic matter without generating any toxic disinfection byproducts (DBPs) and can effectively replace all oxidant and non-oxidant biocides. It can also be implemented in lieu of ozonation and UV radiation, or be retrofitted to optimize their productivity and save energy. With the elimination of biofilm, it will minimize the chemical demand in the system and provide long residual protection. It will not affect the pH of the water, nor will it create scales, sludge precipitations, or a corrosive environment.

In water treatment plants, the mineral oxychloride solution is cost-competitive against chlorine and sodium hypochlorite, and less expensive than chloramines, chlorine dioxide, peracetic acid, hydrogen peroxide, and the rest of the biocides used in the industry. When direct savings are not obvious, one should look and evaluate several indirect benefits. It is very stable in normal storage conditions with a conservative shelf life of at least six months. Facilities will need fewer deliveries, and it will take much less storage space than chlorine since it could require 15 to 20 times less volume to achieve the same results. It does not require specially trained personnel, capital investment, or ongoing operational expenses. It works well with all water treatment products. The implementation can be seamless in any treatment facility, as it does not need a transition period. It will optimize the overall process and may help reduce the total amount of chemicals being used. Most important, the system will never be in violation.

The technology of advanced oxidation found the perfect match with a monitoring tool known as ORP, or oxidation-reduction potential. ORP is a term used frequently in the water treatment industry and is a measure of the cleanliness of the water and its ability to remove contaminants.

ORP is a convenient method to assess the ability of the oxidants to perform a task. The ORP meter will indicate, in a quick and precise way, when there is an oxidative environment capable of causing a level of damage not compatible with the possibility of pathogen survival. The higher the ORP level, the more residual activity is available to protect the water and the quicker the microbes are eliminated.

ORP level can also be viewed as the level of bacterial activity of the water because a direct link occurs between ORP level and the coliform count in water. Table 2 shows a summary of results from various lab simulations and commercial hydrocooler survey studies (UC Davis, Trevor S. Suslow). 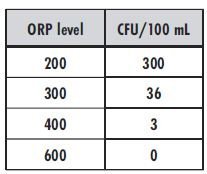 An ORP of 600 millivolts (mV) is considered disinfected water because there is no survival of E. coli bacteria at that level. The World Health Organization stated in the 1971 Guidelines for Drinking Water Quality that the oxidation-reduction potential was the most accurate indicator of water quality and established 650 mV as the recommended ORP level for potable water.

In a third-party study using time-kill assays conducted by Special Pathogens Laboratory — a Centers for Disease Control and Prevention (CDC) Environmental Legionella Isolation Techniques Evaluation (ELITE) program facility in Pittsburgh, PA — it was demonstrated that the mineral oxychloride solution “ … killed 100 percent of Legionella present at a concentration of ~2x106CFU/mL.” The result was achieved immediately, at an ORP of 679 mV.

How Is This Mineral Oxychloride Solution Used To Control Legionella?

We can simply say that this new product is used in the same way as any other treatment chemical but applied differently. As an illustration, using the example of treating premise plumbing, there is no need to apply excessive concentration or wash off the system. The smell of the chemical will not be noticeable, and the water will not have a distinguishable taste. The building occupants do not need to be evacuated due to possible hazards because the chemical will not generate toxic fumes. There is no need to pressurize the system to allow for contact time, since the product reacts in fractions of a second. Biofilm will be removed with treatment (as a bonus, there is no need to replace plumbing fixtures). The pH of the water will not be affected and will not create a corrosive environment that can damage the pipes.

The following table explains how the advanced oxidation technology of the mineral oxychloride solution removes life-sustaining aspects of Legionella bacteria.

Advanced oxidation is a non-selective process. Different oxygen species will be acting simultaneously, and several reactions will be taking place at the same time. Additional benefits will be realized in Legionella applications:

Hi, I’m Shirley, the manager of Linho Machine co.. I’ve worked in filling equipment industry for 10 years. The purpose that I upload these articles here is to share the knowledge related to filling lines especially the liquid filling machines from a Chinese supplier’s perspective. Hope you also will leave your comment here to share with us your idea.